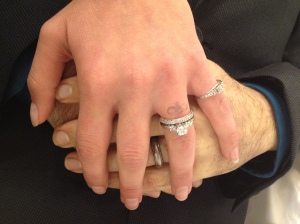 This post is going to be different than some of my other posts. There will not be a list of tips, no brand new ideas, but maybe there will be something for you to ponder.

This past week a young woman named Brittany Maynard received a lot of attention for ending her own life. You can read her story here. To sum it up for you, she decided to move with her family to Oregon so she could be prescribed medication to end her own life. She had terminal cancer and died at age 29.

This past week also marked the passing of someone a little closer to me – Steve’s uncle Denny. Denny passed away at his home at age 67 after a life of many medical ups and downs.

There is a reason I write about these two individuals. I couldn’t help but read all of the judgments and comments placed on Brittany’s decision by the world. Some agreed, some disagreed. Some became extremely agitated and bothered by a person that they have never, and will never, meet. Some of the people commenting have never lost anyone close to them, and others were fellow widows. What disturbed me the most was the polarizing effect of this entire conversation around death. As a society we have become so selfish as to think that our personal moral compasses are always “right” which automatically means that there are other people that are “wrong”.

I’ve been faced with death a few times in my life. The three that stand out the most are three people that meant the world to me. Three people that helped shape who I am. Three people that I have loved and lost – Eldor, my Grandma Maxine, and Steve. I’ll take the heartache of losing them for the simple fact that the joy they brought to my life was worth the sorrow. I feel like I have some qualifications to speak on death because it has been a significant portion in my life.

The only person that can decide how they would like to die is the person dying. If you are one of the people in the room when that decision is made, don’t speak up. Don’t try to convince the person that your idea is better. Only that person at that time can determine how, when, and where they would like to go. I would venture to guess they have spent hours, days, weeks, or months pondering their decision. Support them with your entire heart. For Brittany, it was prescribed drugs. For Denny, it was a chance to see home one more time. Don’t take away the person’s right to make their own decisions if God has given them the opportunity to do so.

People have seemed to get hung up on these words that reflect the Oregon law that allows prescription death. They take offense to Brittany’s “Death with Dignity” campaign, even going as far as to challenge her for being weak when their loved one “fought to the very end…through pain…etc”. Death is death. How you choose to spend your last days is your choice.

However, there is life with dignity. Did you live life trying to make the world a better place for others? When people spoke to you, were they uplifted or brought down? Were you thankful for the little things in life today? Death is death…it is hard and can be quick or very slow. LIving is where we can leave a legacy. Everyone dies, but not everyone truly lives.

You can never prepare for the pain and emptiness you will feel when someone you love dies. Steve was gone instantly and there is nothing that prepares a person for that. In the case of Denny, my Grandma, and in some ways even Eldor there was a chance to say goodbye. I had the chance to let them know they were loved. I was able to tell my grandma how much she meant to me in a private conversation and I was at peace knowing I didn’t leave anything left unsaid. However, when that moment came and she took her last breath, the loss was huge. It is final. When I received the call that Denny had passed all I could think about was his wife, Paula. I know she had her time to prepare, but I also know that there is no way to prepare for a life without the person you planned on spending your entire life with. There is no way to reduce the pain of the finality of that loss.

Denny’s wife Paula is now a widow. There is no escaping the fact that she has to walk into an empty house that will likely never feel like home again. I get it. Brittany also left behind a widow. He gets the opportunity to carry on her dying wish to be happy, have a family, and continuing to push for the right to end your own life with prescription drugs. He had his time to make her last year one full of memories that he will cherish, but those memories don’t make the bed less empty. The memories don’t give you the person you laugh with, cry, and just love as part of yourself. No matter how the loss came about, no matter what choices were or were not made, those left behind have lost someone that cannot be replaced. That loss is universal.

Going back to the start of this post, I have to wonder why people in this world feel the need to take time out of their day to judge a 29 year old with terminal cancer for her decision on how she would like to die. She made it a point of conversation so other people could have the same opportunity that she had. She never stated that everyone should follow in her footsteps. She never stated that this was the best decision for everyone. She said it was the choice she made for herself. Would I make the same choice? I don’t know – I have never been faced with her circumstances.

Think of all the time that was lost in this debate/argument/criticizing/defending campaign. What could we as a society have done with the millions of minutes spent focused on a single topic?

We could have donated our time to make our communities a better place to live. We could have wrote a thank you card to a friend we haven’t spoken to in awhile. We could have spent time playing with our children. As one person we may not have spent more than 5 minutes reading or thinking about the topic of the right to die in the way you choose, but think about all your neighbors who also took that time…how can we live life better in that amount of time? How can we make a difference and truly Live With Dignity instead of focusing on Death with Dignity?

What is one thing you will commit to do this week to truly live your life in a way that reflects how you want to be remembered?