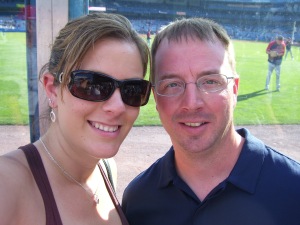 Traveling with Steve is one of my favorite pastimes. I loved taking trips with him.

Earlier this week I wrote about my bucket list and why you should have one too. Today I want to share with you one of our living the list trips – to New York!

Steve had a childhood dream of seeing the Yankees play in Yankees Stadium. As an avid baseball fan, the stadium held a rich history – 2008 was the final season of the team playing in the storied location.

We were itching to take a vacation – I was 6 months pregnant, you could call it a babymoon! We decided that a trip to New York would fit the bill and fulfill one of the items on his list. I was excited to see New York, to take it all in and we did!

If there is something on your list – make sure not to short yourself. I let Steve book the game tickets and I’m glad I did, because I would have gone too cheap after seeing how expensive they were. Steve’s exact words were, “This is the only time we will ever see a game in this stadium. I want to be able to sit in a good location and truly enjoy the game.”

We did just that and even had a waitress! I just looked at Steve and said, “Don’t even tell me what these tickets cost. I’ll enjoy it more that way!” That statement proved to be true. I look back now and knowing what we spent, I can honestly say it was worth every single penny to see the pure joy and pleasure on Steve’s face watching that game. Every single penny.

To Spend and Where Not to Spend

We had a budget and found creative ways to make it all work. We found a great deal on a hotel and it was still in the city and close to Central Park. We didn’t want to be too far out, but knew we also didn’t need to stay in Times Square. Choosing to stay eight blocks away, saved us about $100 a night.

Transportation can also get expensive. We took the subway instead of taxis and rode the SuperShuttle from the airport to our hotel. We also walked between places as much as possible. This was partly due to wanting to see the city and partly to save some money. I bet we easily saved anther $100 just by choosing alternate transportation methods.

Food and drinks also add up quickly. I was a cheap date since I was pregnant. I also brought granola bars for breakfast. Steve was not really a breakfast fan and granola bars work great for me. We were able to find great food that we didn’t have to pay exorbitant prices. Micky Mantle’s restaurant was our big splurge – Steve just couldn’t pass up that experience! I’m glad we didn’t.

Prioritize What You Want to See

In New York it is really easy to find things to do. So easy that we needed to prioritize what we really wanted to see. We both wanted to see the Statue of Liberty, the World Trade Center Memorial, and Times Square.

We also went to the Empire State Building, Top of the Rock and walked around to see some really neat buildings. One of my favorites was a beautiful church that was open to the public. I also fell in love with the World Trade Center location. I could have stayed in the museum for hours.

Make sure you have an idea of what you’d like to do and see. If you and your travel partner have different ideas of what’s fun, try to pick something from each of your lists and make a combined sights list by compromising! 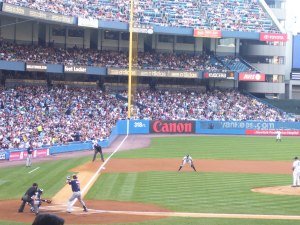 Twins up to bat!

My favorite memory of the entire trip was the ball game. It was so neat to be a part of someone else’s bucket list trip. I literally got to see Steve experience something he had only dreamed of. This was the third time I saw Steve realizing one of his dreams – our wedding and when I broke the news that he was going to be a daddy were the other two.

Back to the ball game – we had to arrive three hours early just to get in line. We had tickets, so I couldn’t understand why we needed to do this. Since it was Steve’s dream, I just went with it.

I found out that you need to be one of the first 100 in the door to get into the memorial garden, which was also on Steve’s list. So we stood in a line that only contained us for about a hour and a half. It was 90+ degrees. In the Bronx you cannot just wander alone, so I could only go across the street to the vendors. That consumed about 15 minutes of my attention.

Once we were within 90 minutes of game time they opened the gift shop. We took turns holding our position in line (that was now five people long BTW) and rotating in and out of the air conditioning. When the gates finally opened we ran to the memorial garden. I guess that is what people do. I wasn’t the quickest at six months pregnant, but we made it.

Then came the game. We had great seats and an overall amazing experience. What happened in the middle of the game was a truly a once in a lifetime event. There was a foul ball hit our direction – Steve and about 10 other guys dove for it and I remained in my seat. All of a sudden, a ball lands in my lap. It had bounced off their hands and literally landed on my baby bump!

They were all looking for the ball and Steve turned around and I held it up and said, “I got the ball”. I was stunned, so was Steve – he was also impressed and completely in awe. He treasured that ball and told that story so many times. I still have it with the stamp that says, “The Final Season”. I can’t wait to share this story of our live the list trip with our girls.

Would I Do It over?

One hundred million percent YES! I would have easily paid 10 times the amount we spent to have the memories that we made. They were worth every cent before Steve died and now those memories are truly priceless. There is something amazing about living your list, but living it with people you love creates a lifetime of treasured memories.

What’s your favorite bucket list memory? Or just a favorite travel memory with someone you love?